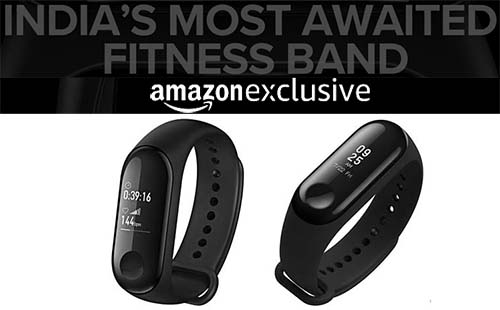 The launch event of Mi Band 3 Smart Watch was been held on 27th September 2018 in Bangalore. Amazon has also made landing page of Mi Band 3 live on its ecommerce portal hinting its new features like Track More in Real Time, See more with a bigger display, and do more on a single charge. Mi Band 3 is priced in India at ₹1,999, and you can buy it online from Mi Official Store or from Amazon India who is exclusive selling partner of Mi Band 3.

Mi Band 3 Fitness Tracker has grabbed the attention of fitness freaks by setting up best price for the product, as well as the look of Mi Band 3 has been improved as compared to Mi Band 2. If you go to buy Fitness Band with similar features of rival brands, then its cost would be significantly high. Also Mi Band 3 looks and feels very premium as compared to other brand fitness band available in market.

Vjay is the admin of the blog RevealThat.com who loves to share various topics regarding Tech and other Internet Related Stuff. If you like to connect with visit our Contact us Page

This site uses Akismet to reduce spam. Learn how your comment data is processed.